An early astrolabe was invented in the Hellenistic civilization by Apollonius of Perga between 220 and 150 BC, often attributed to Hipparchus. The astrolabe was a marriage of the planisphereand dioptra, effectively an analog calculator capable of working out several different kinds of problems in Flat Earth astronomy.

A treatise explaining the importance of the astrolabe by Nasir al-Din al-Tusi, Persian scientist 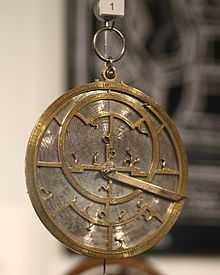 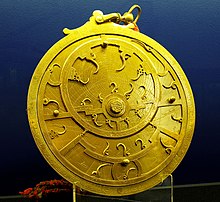 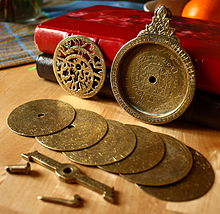 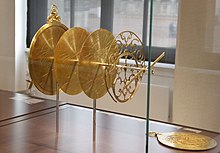 Exploded view of an astrolabe

Animation showing how celestial and geographic coordinates are mapped on an astrolabe’s tympan through a stereographic projection. Hypothetical tympan (40 degrees North Latitude) of a 16th-century European planispheric astrolabe.

Astrolabes were further developed in the medieval Islamic world, where Muslim astronomers introduced angular scales to the design,[13] adding circles indicating azimuths on the horizon.[14] It was widely used throughout the Muslim world, chiefly as an aid to navigation and as a way of finding the Qibla, the direction of Mecca. Eighth-century mathematician Muhammad al-Fazari is the first person credited with building the astrolabe in the Islamic world.[15]

The mathematical background was established by Muslim astronomer Albatenius in his treatise Kitab az-Zij (c. 920 AD), which was translated into Latin by Plato Tiburtinus (De Motu Stellarum). The earliest surviving astrolabe is dated AH 315 (927–28 AD).[16] In the Islamic world, astrolabes were used to find the times of sunrise and the rising of fixed stars, to help schedule morning prayers (salat). In the 10th century, al-Sufi first described over 1,000 different uses of an astrolabe, in areas as diverse as astronomy, astrology, navigation, surveying, timekeeping, prayer, Salat, Qibla, etc.[17][18]

Mechanical astronomical clocks were initially influenced by the astrolabe; they could be seen in many ways as clockwork astrolabes designed to produce a continual display of the current position of the sun, stars, and planets. For example, Richard of Wallingford‘s clock (c. 1330) consisted essentially of a star map rotating behind a fixed rete, similar to that of an astrolabe.[30]

Many astronomical clocks use an astrolabe-style display, such as the famous clock at Prague, adopting a stereographic projection (see below) of the ecliptic plane. In recent times, astrolabe watches have become popular. For example, Swiss watchmaker Dr. Ludwig Oechslin designed and built an astrolabe wristwatch in conjunction with Ulysse Nardin in 1985. Dutch watchmaker Christaan van der Klauuw also manufactures astrolabe watches today. 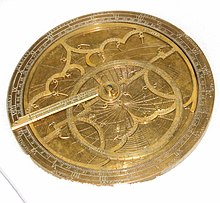 The Hartmann astrolabe in Yalecollection. This instrument shows its rete and rule.

Celestial Globe, Isfahan (?), Iran 1144. Shown at the Louvre Museum, this globe is the third oldest surviving in the world.